Alive to Love and Strive (Book)

Clint Lukas’ relentless hero works hard, although he despises work; he produces movies, even though he hates movie people; he fancies himself a ‚ladies’ man‘, but constantly gets into fights with them. Why does everything always have to be so complicated? He’s not the one to blame. At least, that’s what he thinks.

The Berlin author and movie director presents a marvelous collection of brutally honest, headstrong and self-deprecating short stories, stories of himself as a byronic hero, a dawdling globetrotter, a sarcastic observer, always far from normal or ordinary. Defiant, furious, vivid and entertaining close to the pain threshold.

Clint Lukas was born in Neustadt an der Weinstraße in 1985 and has lived in Berlin since 2005. He never studied anything, nor did he learn a profession. With his company ‘Lukas & Levi Filmproduktion’, he makes movies. He is also a regular contributor to the ‘Surfpoeten’—Berlin’s oldest literary stage—and has read his work about women, alcohol and other worldly pleasures to delighted audiences. He was recently called the “sawed-off shotgun” of Berlin’s underground stage scene. The anthology ‘Alive to Love and Strive’ by Clint Lukas was originally released as ‘Für die Liebe, für die Kunst’ in September 2011. One and a half year later his first cross-media novel ‘Das schwere Ende von Gustav Mahlers Sarg’ was published by Periplaneta, and it includes the English-speaking short film ‘Coke and Tarts’ on DVD. 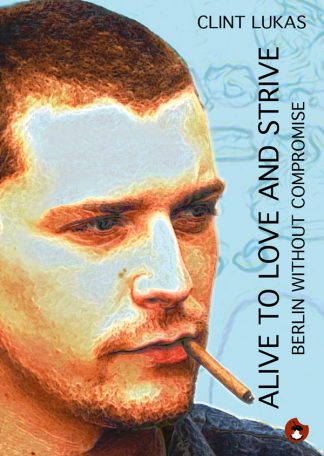